Discuss the art of war for the Dark Elves and the inferior races that dare to oppose them here.

Hail, most mighty and feared dreadlords! I've been making plans to build a Dark Elf army of 6th edition models, themed on the greatest of all Naggaroth's cities, Hag Graef.

The main dilemma I have however is the colour of the armies heraldry. The gallery in the 8th edition army book doesn't state it as clearly as it does as the other cities, but it seems like a sort of magenta hue. I'm a little worried that the colour would look too similar to Naggarond purple.

In terms of units, I feel like Malus Darkblade and Cold One Knights/Chariots are the most obvious inclusions for the army theme. But what other units might be thematic for such a force?

Any other advice on building an army that screams "Hag Graef" would be deeply appreciated. 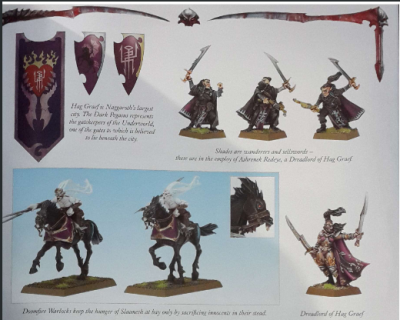 Welcome GreatGodsofDruchii to this website.
Alas, my memory fails to give the information you need.
Did you try searching the archives of the site?
Winds never stop blowing, Oceans are borderless. Get a ship and a crew, so the World will be ours! Today the World, tomorrow Nagg! {--|oBrotherhood of the Coast!o|--}
Top
Post Reply
2 posts • Page 1 of 1