A journey into Darkness

Forum rules
Remember that picture file size should be no larger than 256KB.
For the full Painting and Modelling rules, visit [url]http://www.druchii.net/phpBB3/viewtopic.php?f=9&t=27440[/url]
Post Reply
133 posts

That is likely adding to your glossy effect somewhat. Heat applied to the ink or shade will tend to produce a glossier finish.
That's silly! Playin with little statues, pretendin' they're fightin'! Why not just round up a bunch of real goblins and lettem' whack it out?
Top

That is likely adding to your glossy effect somewhat. Heat applied to the ink or shade will tend to produce a glossier finish.

Quick update. Corsair unit is finally finished. Moving onto the Witch Elves and a Chariot now. I also tried painting Lahmian medium direct onto the coldone rider and this wiped out the shine very well with no adverse effects I can see. Will post a picture of him when base is done. 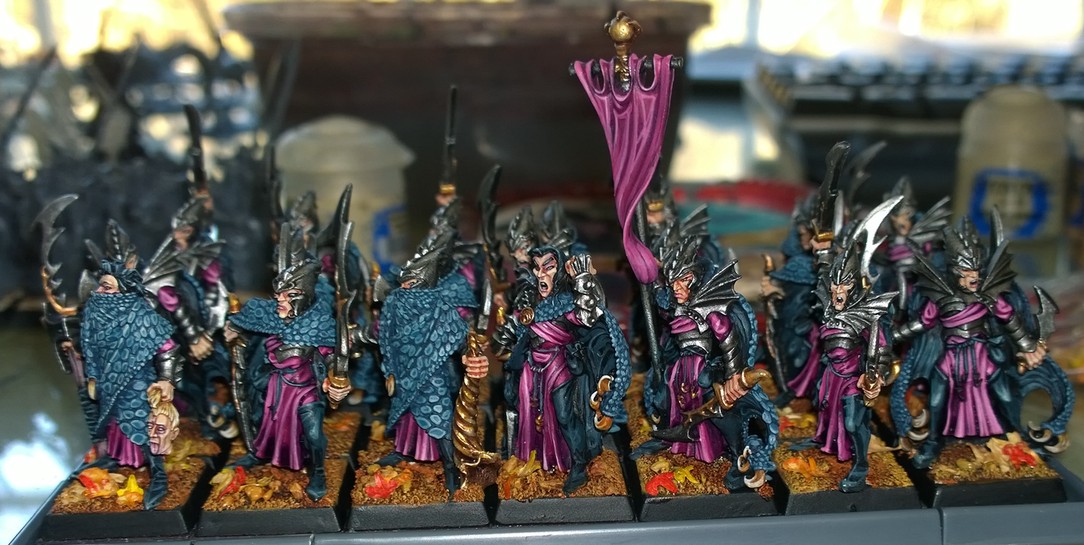 Quick group shot to show the progress of the army

Looking very nice indeed. I really like the finish on the banner.
SDCs also have come out a beautiful colour.
My Kings of War Plog - Forces of Nature

Very very nice, I love your Corsairs.
Army is looking awesome together:)
And thanks for the glow recipe!
My PLOG: viewtopic.php?f=9&t=72153
Top

Thanks for the nice feedback. Working on some witches at the moment. Really enjoying them. Hopefully have an update for you all after the weekend
Top

Nice color scheme and good choice of models. The basing fits well to the color scheme and I'm a bit jealous that you posess the corsair champ with the outstretchted left fist. My army still lacks this one and I want to have him.

Thanks for the replies. The next 5 witches are coming along really nicely now. Just a little bit of gold, the banner and all the black to go on them.

I am missing the corsair champion that is pointing. The stupid collector disease in me really wants it for some reason as well. The fact I have the metal corsairs at all is just stupid. I have a very nice unit of the plastic ones which I really like as well. However I was doing my usual ebay searching and came across them at a really good price and then decided I had to have them. I have another 9 of them I want to finish painting off at some point as well so that if I decided that I want to run a unit of 30 I can.

I am also really enjoying the Lion of Flanders blog at the moment. Which is what has got me thinking about the sisters. I really want to paint them up in a Harlequin esque way. I think the face mask done like this would look amazing.

Great scheme if you can pull it off. Nice colours and diamond patterns look amazing when done right.
Looking forward to seeing how it comes out.
My Kings of War Plog - Forces of Nature

Would love to see it.

You could fluff it up as a renegade band of Sisters who defected from Eldrazor to Loec!
OldHammer Advanced Ruleset
- Adding Tactical Depth to Your Favourite Tabletop Wargame
Top

Ok small update managed to get another 5 witch elves painted to take the unit to 6, so another 14 to go. Still nice to see things moving forward.

I have been a little side tracked by the GW witch Elves however as I wanted to paint two and see how they compared. Will do a comparison when they are finished.
Top

Very nice. Love the basing.
Think you got a nice balance of colour on the faces and the banner is a lovely shade.
Good work.
My Kings of War Plog - Forces of Nature

Man you have a steady hand! Great work on the eyes and brows. Nipples too.

And I'm definitely interested in a side by side compasion, I wonder if they would work together.
My painting blog

Thanks for the feedback.

My short hand answer would be that the GW and the Raging Heroes witch elves do not work together. Raging heroes are a little on the petite side but work very well compared to every model in the GW dark Elves range bar the woman. Who all seem to be huge even compared to other GW plastics. They are both lovely models and to an extent will work fine in the same army just not in the same unit.

Skin is done on the GW models now. Hopefully have an update for you early next week.
Top

Quick update. I have been distracted by some GW witch elves I got when I cancelled my White Dwarf subscription. They are really nice models however what I found most interesting about them is the size. While I feel that the Raging Heroes are slightly on the small side I feel the Witch elves are on the opposite end of the scale.

My main issues with the GW kit revolve around the lack of variation in it. There are only 5 body types and while the models are plastic they only go together in one configuration. If I am honest for rank and file this is not a huge problem although the fact they are all jumping off something means the piece of stone being repeated as much as it is a little odd. Where it hurts more is in the command models and in particular the champion. The standard and musician pieces are nice but I can't help but feel separate unique bodies should have been used for these pieces. This is even more obvious with the champion whose only point of difference from a regular rank and file is her head which is very hard to differentiate. In truth for the command group the real answer is to purchase the cauldron of blood and use the hag or hellebron as your champion model. One criticism I heard of the new Witch elves was the lifeless blob like hair. I have to say that in my opinion this is not a valid criticism. The hair on the witch elves is fantastic and adds to the movement and presence of the model. When you start to paint it there is no problem putting in the impression of individual strands of hair and when I compare the RH models to the GW ones the hair on the GW models is far superior.

I wont go into cost much here other than to say that the in reality the cost of the raging heroes models and the GW models are actually very similar as it is possible to pick the GW models up from ebay for about 10 usd less than the full retail price. Finding a discount on RH stuff is very difficult. Also and just as importantly if you want to run sisters then you can just purchase the bodies from ebay saving yourself a substantial amount of money compared to buying a full box. My average box cost for a unit of 20 sisters and 30 Witch elves is more or less the same as the full retail cost of the Dreadswords box.

The RH models have 10 different sculpts which is nice. However they are very small which makes painting them slightly more difficult. They are also metal which again means hold them and rubbing paint off is more problematic than on the GW plastic models.

Both model sets are really nice. RH's main weakness is in the fact that they are a little on the small side so will not combine as well with the cauldron and if you do want sisters there is no cheap way to get this. Having said this raging heroes are set to do new a Dark Elf kickstarter so there well maybe some bits in there that which are good replacements to the GW bits.

The GW witch elves are not finished need to put there makeup on and do the bases but they are getting close. 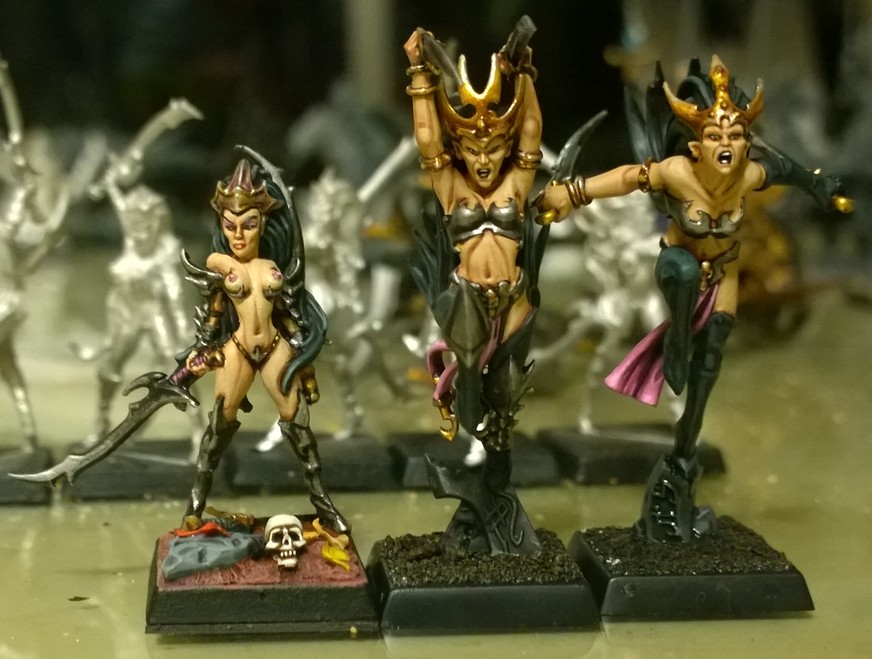 Nice to see the comparisons, bigger difference than I thought.
Could fit nicely in the same army, not sure about the same unit.
My Kings of War Plog - Forces of Nature

Thank you for the comparison and review.

I expected there would be a size difference, but it is even greater than I would have thought. RH Vestals are rather petite, but they do work with GW models (at least most of those in my army, which I have to admit does not prove that much), the new witches must tower over other Dark elves!

As for RH stuff and sisters - I plan to do mine (eventually, if the army evolves that way) out of sci-fi Vestals plus whips from ebay. not as cheap than just buying bodies and having both, but it should work. Hopefully, I haven't done it yet.
My painting blog

Yes they don't really work together in the same unit. Thankfully I have 20 RH so will run them as a separate unit to the GW ones. I also think they fit well with the other GW DE.
The sci-fi vestals will work well. Really intrigued to see what new models come out in there kick starter as well.

Will try to get a few more photos comparing to other DE models tonight.
Top

Finished a concept Sister. I actually ended up leaving the mask white as the contours in the face I felt would cause it to loose some of the effect. The check pattern made it into a lot of other places though. Overall I am very happy with how she turned out. Let me know what you think or whether it works or not. 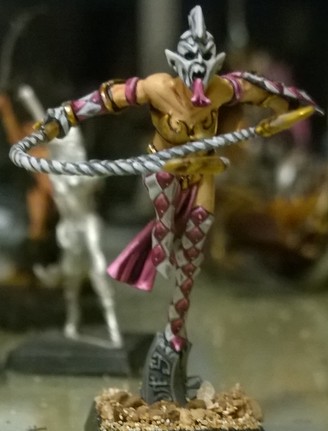 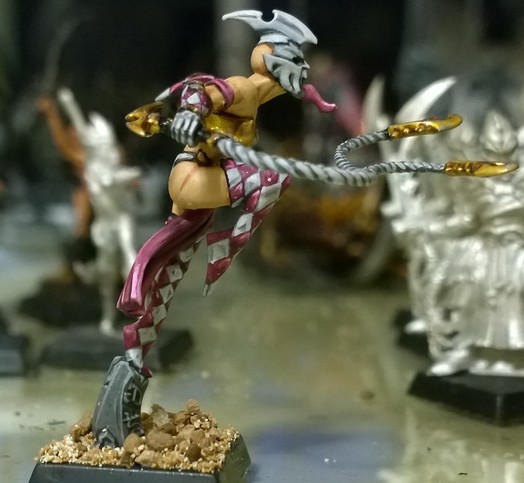 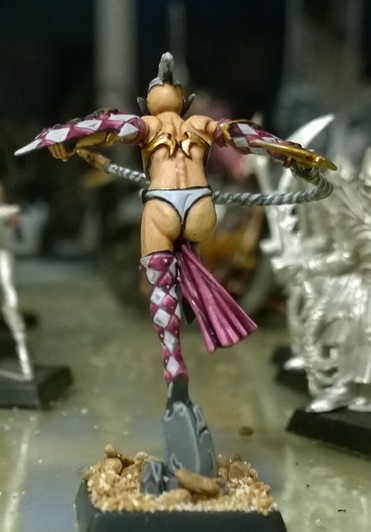 That is a good looking SoS, but no checked thong?

The mask looks good as is.
Very impressive.
My Kings of War Plog - Forces of Nature

Wow...such a unit will look so stunning on the table! Just...wow!!
Top

Awesome! I love your work. Keep it up.