SHOW US YOUR ARMY HORDE!!!

Forum rules
Remember that picture file size should be no larger than 256KB.
For the full Painting and Modelling rules, visit [url]http://www.druchii.net/phpBB3/viewtopic.php?f=9&t=27440[/url]
Post Reply
73 posts

I have the same daemonettes, think I have the whole set :-)
My Dark Elf PLOG
Top

Trilobite wrote:I have the same daemonettes, think I have the whole set :-)

Kewl. I have most of them as well.

P.S. When I said your son was already a better painter than me I wasn't joking

I'm going for quality not quantity

Here is a scouting force for the mighty horde

You can find the rest of the army including close-up shots in my PLOG: http://www.druchii.net/viewtopic.php?f=9&t=73286

I don't want to derail this thread.
Top 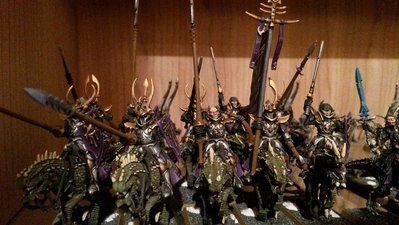 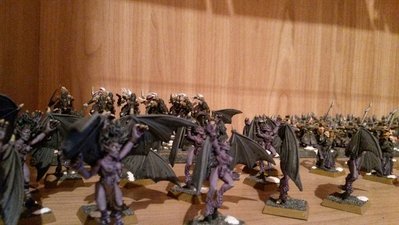 Very nice horde there Ilphrin.
My Kings of War Plog - Forces of Nature

Thanks for posting Ilphrin and Hillbilly Carl - how many points roughly do you have so I can add it to the points total
http://www.cultofkhaine.com

Beware for Ronan has come a knocking. Now where is that daughter of the Everqueen to laime as my own...wait, she's i another castle? Why didn't you tell me that that you walking hallucinogen? Get back here, I'm only going to hit you once!


In all seriousness, here is my army!

Not the best picture ever taken, but it works, but its the whole group and some terrain I am working on or proud of.

Parcked infron of my manner are 15 Cold One Knights with my Dreadlord (the guy with the horns ont he red fat one) TheBattle Stadar d bearer (the oe with the halberd and has the banner samurai style), and a sorceress on an albino cold one (need I say more) with Malus packed next to them.

Next to them is my 40 corsairs with an assassin (the one in black and some silver, the latter being an actualy small chain), a couple other masters with a pair of swords (one also looks like a blue ninja with a cape that is crouching an posing and one made from a Dark Eldar concubine thingi I can't remember the name), and a fire sorceress (another Dark Eldar mini, this time in red).

Behind the corsairs is Mr. Turtle the "Turtle Hydra" or Royal Hydra if you want, and Bob the Chaos SPawn of Nurgle. The Hydra is made from kit bashing a carnafex and spare hydra necks, heads, and arms. The Other was made from an air drying clay I got at craft chain (Michals) and modled him after Malboro from Final Fantasy.

The rest of the Manner which was made from 2 corn nut boxes on the bottom, another on the second floor with some foam used as a railing and castle walls. Part of another corn nut box on the top and more packing Styrofoam. Most of my old school crosbowmen (20 with full comand) a sorceress (the one with the staff on the far left, probably dark magic) and a dreadlord (the old school metal phoenix guard with the ogre sword on the end of the stick) and my harpies on the third floor (3 metal harpies, 1 something else I think called a bird woman, 9 kit bashed harpies with daemonetts with Tyranid Gargoyles, a Reaper Mini Wearbat, and the rest are old metal witch elves with furry wings).

Ok, anothe rproject until I make a trip to Wall MArt to get more craft sticks, I took an old bird feeder that the plastic broke on the bottom and said: Wizzard's tower! That or floating fortress as the cord makes moving it easier. Added the wooded planks with said craft sticks so dark shards, in this case my latest bash kited DE dark elves/HE archer unit with an old metal sorceress I kited to use the old and sadly no longer viable Heart Seeker ( magic Crossbow, 3X hits that always hits on a 2+ at Strength 4...The other elves get one bow at least, why not us? HELL, even Wood Elves get a couple peices of magic armor why not this? But I degress) and a metal current assassin.

On the Hourglass, is my attempt at Malekith using the old Metal Dark Eldar Archon, gave him a sheild, adn bent the orns ad added second set twirling around that. I like his eyes the best because all I had toi do wa s make them green and they look glowy!

Old School COld One Chariot, a 6 rank deep hoard of dreadspears (remember when they came in packs of 16? I do to), with Executioners and a coudron of blood (complete with standard bearerig death hag) and several charecters. THe rest in the next picture where its a better pick, although I realized I got the pick of the sorceress on the big tree thing (a vace I got at Good will and used Green stuff on the top to keep her from falling in)

Some Bolt Throwers, a sorceress on a Dark Pegasus on another Fulcrum made of foam (the same packign one that the stairs leadign up tio it came in, with flames from the Couldron for effect. Infront of that is the Blood Wrack Medusa. and another charecter.

Better picture of the rest coming.

Dark Riders, mostly Glaude guard riders with green stuff cloaks, some DE warriror spears and dark crossbows, a Brettonian knight's head on a the long spear typicaly used in the old standards, with the champion holding an Dwarf hand Ax. 2 units of shades, one kit bashed mixing green stuff, glauide guard, and warriors, with another Reaper mini (I love that company, can't you tell) as another assassin (If four Turtles can be ninjas, so can the throwing star weildinf monk in pink), another 11 metal shades (with some upgrades for full comand) and 4 ogre leadbelchers behind them.
Who needs sanity? I have a Hydra
Top

FINALLY got around to get them all out and take a picture. In hindsight the photo is not optimal, but i really can't be bothered to take them all out again

you may notice the absence of any reasonable number of witch elves, but I'm still waiting for Avatars of War... nearly a year now.
From the ashes a fire shall be woken
A light from the shadow shall spring
Renewed shall be the blade that was broken
the crownless again shall be king.
Top

I dub this "Yes.. I know"
I love me a bowl of numbers to crunch for breakfast. If you need anything theoryhammered, I gladly take requests.

I can most certainly understand that.
My Kings of War Plog - Forces of Nature

El hombre wrote:FINALLY got around to get them all out and take a picture. In hindsight the photo is not optimal, but i really can't be bothered to take them all out again

you may notice the absence of any reasonable number of witch elves, but I'm still waiting for Avatars of War... nearly a year now.

What I actually notice is an absence of the picture. It's not showing.
Chinese Relativity Axiom: No matter how glorious your triumphs, nor how miserable your failures, there will always be at least one billion people in China who don't give a damn.

El hombre wrote:FINALLY got around to get them all out and take a picture. In hindsight the photo is not optimal, but i really can't be bothered to take them all out again

you may notice the absence of any reasonable number of witch elves, but I'm still waiting for Avatars of War... nearly a year now.

What I actually notice is an absence of the picture. It's not showing.

Right click the icon and select "Open in new pane".

This is why we prefer Imgur to Photobucket.
PLOG | FACEBOOK | BLOG
Top

@ Daeron - I don't think boxes count, unless it a box army! Get them assembled and lets have a better look

comming in at ~1761 points without Characters, I have;

I'm already hard at work to expand it

The Karibdyss is a really nice complement to the rest of your army!
OldHammer Advanced Ruleset
- Adding Tactical Depth to Your Favourite Tabletop Wargame
Top