Forum rules
Remember that picture file size should be no larger than 256KB.
For the full Painting and Modelling rules, visit [url]http://www.druchii.net/phpBB3/viewtopic.php?f=9&t=27440[/url]
Post Reply
9 posts • Page 1 of 1

Hey so this will be the evidence that hobby is happening!

I am painting a new Dark Elf force and seeing as the Invasion of the Island of Albion was my inspiration for starting Warhammer 14 years ago i wanted to base it around a Druchii invasion fleet. (My 'other' collection is a Wood Elf force some 4000pts+ strong led by a Truthsayer.)

So lots of corsairs and bolt throwers and sea monsters probably led by a fleet master with bargained mage support. From that initial concept i will start painting other units. However a few friends and i are starting new armies for the new year and the D.net painting challenge fits in nicely with that. I even have a Dark Emissary around here somewhere...

First up will be 4 Bolt Throwers i started over the new year.

Great concept. Looking forward to it.
My Kings of War Plog - Forces of Nature

Thanks Amboadine, just need the motivation to get going, hope this will be it!
Top

Progress has been made on January's 250+ points

I am following the Dark Elf Digital Painting Guide for the majority.

Then Nuln Oil the whole thing.

Leave it to dry overnight and tomorrow will be highlighting. 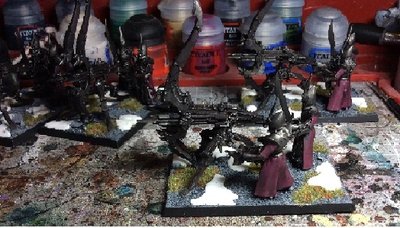 Painting has happened! So i have completed the minimum requirement of at least 250 points for January!

In that i have finished 4 Repeater Bolt Throwers (280pts) The bolt throwers are metal ones i have had in pieces for ages and i have used the new plastic dark elf warriors as crew and attached them to 'monstrous cavalry' bases for ease of use. (Also the snow effect i think looks cooler like this) 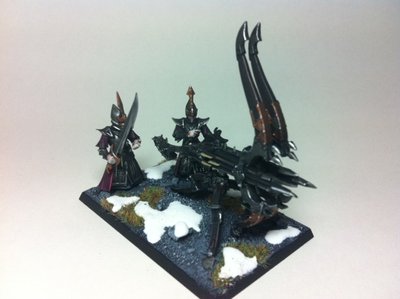 The grey base colour is achieved through painting mechanicum grey and then dry-brushing dawnstone followed by Longbeard Grey.

I have also added static grass (the dark green) before adding my snow mix.

The snow effect is a 50/50 mix of PVA and Filler with a dollop (nautical term) of ceramite white added.

I think now i will move on to build the three Hydras i will be including in my Corsair themed list and then locate my dark emissary.
Any i get done extra this month will not come off the Feb total i will still hold myself to at least 250pts a month.
Last edited by Mavnav on Thu Jan 15, 2015 9:45 pm, edited 1 time in total.
Top

Love the RBTs and the crew! It would be good to see some more close up shots (bit hard to see details in the photos you have posted)

I am still experimenting with the camera and pic sizes for posting etc (bit of a noob) i will improve pics as i go along. I am using paint to resize things at mo, and an ipad camera so not much room for manoeuvre.
Top
Post Reply
9 posts • Page 1 of 1