Tits or no tits ?

Forum rules
Remember that picture file size should be no larger than 256KB.
For the full Painting and Modelling rules, visit [url]http://www.druchii.net/phpBB3/viewtopic.php?f=9&t=27440[/url]
Post Reply
43 posts

Lord_azoth wrote:Despite my love for tits, IMHO doesn´t make any sense armored male warriors and half nude female warriors. One thing is to make the female units look a bit sexy, this would be too much

This is the exact reason why I decided to go quite the opposite way and make topless males too, otherwise witch elves would stand out too much and Marchosias just couldn't resist those. (Neither could I, though, after seeing the lovely models by Raging Heroes)

T.D. wrote:Good to get your feedback on this, Rowena

Without posters like you, this forum would descend into rampant misogyny (mostly caused by me

Thanks! I'm not sure being a girl is enough for that and I love how sensible people are being here, but thanks anyway. At least I can claim to be for gender equality with our own lunar (undressed) faction having both girls and guys.

Rowena wrote:At least I can claim to be for gender equality with our own lunar (undressed) faction having both girls and guys.

I vote armored as well. I actually, for the old book, made an all male spear unit, and an all female spear unit. The models don't lend themselves to being bare chested.

Plus, it just seems slightly outputting. Don't get me wrong, I'm no prude nor do I judge women who would go bare. However, it just seems like gamers (especially for fantasy) are stereotyped in a way that this fits into all too well. I felt a little odd painting my Avatars of War Sorceress (I won the model), and wishing she had a cloak or shirt (even if it was revealing) on. I just think it'd look, well, hokey to intentionally make them bare chested when the men are fully armored.

If we were talking about converting Warlocks (setting aside background material as I seem to recall them being all men) into women, I can easily see them also being bare chested as the men are too. It doesn't seem out of place for the unit. When I think of most Dark Elf units, I just see them having practical armor/gear/clothes. It seems like only the Witch Elves, and Hags would really go into a frenzy where they'd charge into battle nude with reckless abandon. From a historical perspective, there were warriors (regardless of sex) who charged into battle nude or mostly nude, but the Dark Elves are a rather established empire with a fairly skilled/professional military backed by industry.

If it was an army that was a Cult of Slaanesh, and you had both sexes with lots of skin showing, that would work. It's just that if you want to do an army with a lot of boobs, I think Slaanesh (either variety) would be the army you want to go with.

It's your army, so do what you like. I'd just do a test model before committing either way.
Yes, I do look like Loki. That is me in my avatar.
Top

WHy not both? Paint them on.

There was a story of a spartan soldier who painted a life size fly on his shield for the soul purpose of bashing it into his enemy so they could get a good look. Maybe these dark riders want the enemy real close so they ca get their heads loped off.
Who needs sanity? I have a Hydra
Top

Definitely worth doing, I made a 10 woman unit of Darkshards a while back - painting their armour red (not topless) to fit my personal back story that they were wannabe witches, but weren't nuts enough, so they dress in red like the witches in my army and stand nearby to shoot anyone too close to their heroines. Makes them stand out from the other core units

But I have three units of them, so one of the units will go with bare tits just for the fun !
The 13th Legion
Top

flatworldsedge wrote:Definitely need some fluff on why that unit forgos the armour - a dare, a wager lost, dedication to a wild sprite, superstition, commemoration of s triumph over Slasnesh, etc? Ace potential.

Jeez its really interesting how fast I voted yes without thinking. Ah well the curse of being a man

I voted tits, and usually I paint them if a model shows them. But if your whole army is armored I`d say go with a more realistic approach and armor them. A whole unit of naked Welfs on the other hand would be quite fitting

Cant believe I missed this thread and the wonderful discussion here.

Having just painted 40 of them myself I would have to say yes - to see something different.

Me too.. And here i was thinking, geez what an activity on the forum, all we needed was a conversation about tits

Should have known it was an old discussion as there is no feminist screaming SEXISM!!
Sorry , i might have been listening to Archwarhammers rantings a bit to much lately

I am an Extraordinary Druchii Gentleman
Top

I have been imagening how it would look, Cults unit was great to try imagine bare-breasted breasts.

Maybe its the word tits that makes it a bit sexist, while breasts are ofcourse the objective naming.

Unfortunately I modelled them already with shields in front of them, hiding the breasts. Now I came the conclusion I would much better like the shields on their backs so I can draw full attention to the tits. I also chopped several crossbows as somehow I saw that pointy front as a bolt (how!). Hopefully I have enough bits to fix and can I cut their shields without too much damage.

I also figured a colour scheme to make it realistic, as command group I will build male bare-breasted Spartan centurions. Fluff is inspired by Spartan women who were also known to be bare-breasted in several occasions.

I will also make strings for their crossbows.

Finally I hope some kneeling archer legs, and will use them for those that are in the first ranks.

It is going to be an awesome and original unit of repeater crossbows!

In any case, it will become a nice sight on the battlefield between all those heavily armoured and mainly male warriors!

PS. Oh and ofcourse a sexy naked lady freehand on the banner!
The 13th Legion
Top

Several years later I got to finally try it 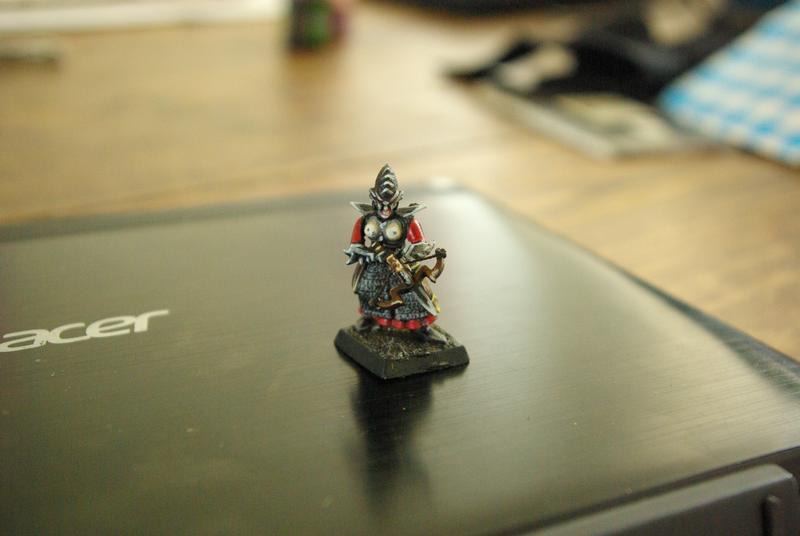 What do you think?
The 13th Legion
Top

Crikey - that did take a while.

I think its awesome!

I think I'll make one for my army as well. Just to show solidarity!
In fact, everyone should paint up 1 bare tited Druchi from the same plastic kit if they got access to it.
Top

Still painting them though haha! 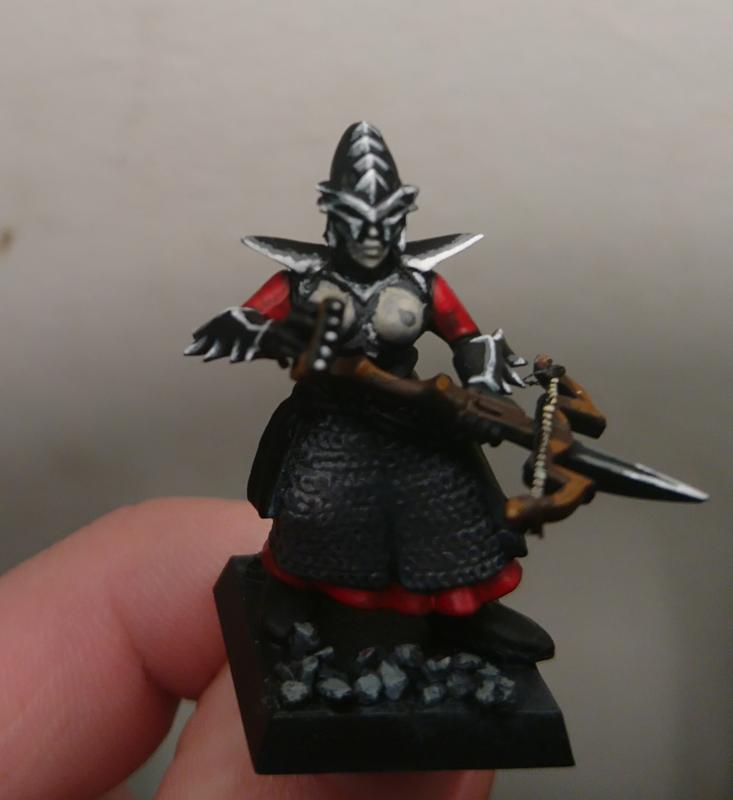 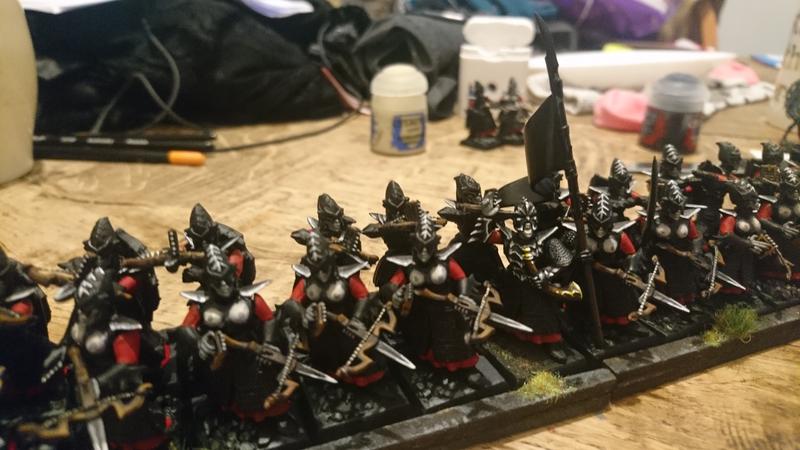 Leaving a model bare chested, in my opinion, doesn't work on a warrior, just because you would want to protect your heart and lungs from being impaled on a blade, and suchlike. Practicality aside though, armouring one side, and leaving the other exposed gives a nice edgey look, especially if you balance it out with skimpy-er lower half garb on the armoured side, and heavyer clothing on the other leg.
I can bring you in warm, or I can bring you in cold. That is the way of the hunter.
Top
Post Reply
43 posts